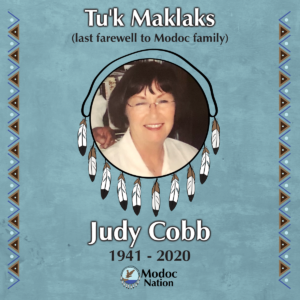 Judy (Follis) Cobb a longtime Miami resident and well-respected local business owner passed away at her home on Thursday, April 9, 2020. Judy was born in Joplin Mo, on February 10, 1941 to Judd and Nita (Walker) Follis. Judy was a 1959 graduate of Miami High School where she was very involved in activities, clubs and was crowned homecoming queen. After high school, Judy obtained her bachelor’s degree from Pittsburg State University and shortly thereafter became an elementary school teacher.
On August 17, 1985, Judy married James “Jim” Clayton Cobb at All Saints’ Episcopal Church in Miami. She and her husband James owned several local businesses including a Texaco distributorship, Carnation Milk and in addition, Judy became well known as the owner of the Hallmark Store in Downtown Miami. Judy was a member of the Modoc Indian Tribe and served as the second Chief. She was preceded in passing by her parents, Judd and Nita Follis, her husband James Cobb, and son Donnie Grissom.
Survivors include her step-daughter Jame’ Whaley of Katy TX, brother, Bill Follis and wife Jan of Miami, sister Karen Garvin and husband Gary of Joplin and her brother Phil Follis and wife Liz of Miami. Three nephews; Phil Follis, Jon Wooley (Barb), Tod Wooley (Rhonda), and Justin Garvin.
Judy was very witty, loved to laugh and socialize and had a strong passion for Art. Judy was a close personal friend of Charles Banks Wilson and spent many years collecting his artwork. Judy was a member of the Miami Country Club and enjoyed playing golf with her friends. She and her husband James devoted over 20 years delivering meals for the Meals on Wheels program and served several years as members of the Chamber of Commerce.
For the health, safety, and welfare of family and friends, due to the coronavirus (COVID-19), the family will be having a Celebration of Life at a later time.
Judy will be laid to rest next to her husband James at the Modoc Tribe Cemetery East of Miami.
The family and friends can leave notes and videos of encouragement by viewing Mrs. Cobb’s Tribute Page at www.brown-winters.com. Services have been placed in the care of Brown-Winters Funeral Home and Cremation Service in Miami. 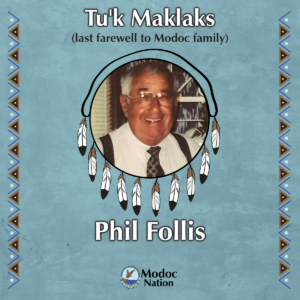 Phil Follis, 84, a longtime Miami resident passed away on Thursday, April 23, 2020 at Integris Miami Hospital. Phil was known for his generous spirit and contagious smile. He will be missed. Services are pending and have been placed in the care of Brown-Winters Funeral Home and Cremation Service in Miami.

Friends and family may send the family notes of encouragement by viewing Mr. Follis’ Tribute Page at www.brown-winters.com.

*If you would like to submit the obituary of a Modoc tribal member, please email your request to mona@cravenmedia.com

Stay in touch with the Modoc Nation.